CREATE YOUR OWN TOUR

We can arrange any of the following tours, and much more… 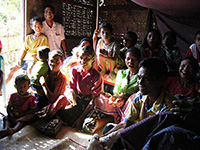 Bena Traditional Village
Bena Village is the most famous and also most visited village in the Ngada district. With its impressive stone formations and ancestral shrines, Bena has turned into a signpost for Ngada culture. Highly visible in the center of the village are ngadhu and bhaga, pairs of shrines – one for each clan of the village – representing the clan’s ancestors. See Bena Village on YouTube

Jopu Traditional Village
Jopu Village is an ancient village that consists of three small tribes: Suka Lumba, Ambulaba, and Amburai. Each tribe has tokoh adat (prominent figures) who decide the rules the villagers must obey. The village is very religious (animistic) and villagers believe in many spirits. Jopu is famous for the tenun ika, a special dyeing and weaving process used to pattern textiles.

Luba Traditional Village
Luba Village is a small, quiet village of about 200 villagers near the town of Bajawa. A visit to Luba Village is combined with Bena Village. The two villages are about 300 meters (1/4 mi) apart. 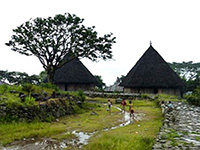 Ruteng Pu’u Traditional Village
The traditional village of Ruteng Pu’u is one of the most popular places to see the traditional compang, a round, stone platform surrounded by a circle of stones and traditional houses. The compang is the center of traditional ceremonies and rituals, e.g., for sacrificial offerings.

Saga Traditional Village
The people living in Saga belong to the Lio tribe, a mountain tribe as contrasted to the Ende tribe living at the coast and in Wolotopo. Indeed Saga is built on a steep slope, and walking around one needs to negotiate some ingenious stairs.

Tado Traditional Village
Tado Village, located 45km (27 mi) east of Labuan Bajo, is one of the best places to get a hands-on experience of the long-standing Manggaraian way of life. You will be able to join exciting ecotourism activities such as pandan mat weaving, cooking and preparation of traditional foods, rope-making, consumption of edible insects and much more. You can also observe the legendary Manggarai Caci performance. 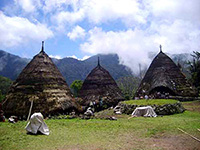 Todo Traditional Village
The village of Todo in South Central Manggarai is located off the main road from Labuan Bajo to Ruteng. In the past, Todo was also the centre of the Manggaraian kingdom and the home of the royal clan. It is a traditional village of the Manggarai hill people; “traditional” meaning a village with a Rumah Adat, a tall traditional house with a high thatched roof and a wood-carved opening, where ancestors are being worshiped.

Wae Rebo Traditional Village
Wae Rebo is a village that still lives and preserves the ancient way of living. When you visit Wae Rebo, you will not only see the authentic Manggaraian housing, but also get an opportunity to experience the daily life of the local people. Most of the people work in their gardens from early morning until dawn, busy with harvesting coffee and processing the beans. There is a 3-4 hour hike to the village.
See Wae Rebo Village on YouTube

Wolotopo Traditional Village
Wolotopo is a rather large and lively village built into a steep hillside. The villagers still strongly adhere to their adat (traditional code governing all aspects of personal conduct) and keep their traditional ceremonial houses in good shape. These houses are not only a relic of history but are also still inhabited by several families. Taking a stroll around the village, you will get an idea of the local daily activities – above all ikat weaving, which is practiced by almost every household – and the interplay of adat and Christian beliefs, expressed in the mix of traditional and Catholic graves.

“We went to Komodo Island for a three days private boat trip in March 2015 with Louis. It was the best choice we could have made. What an amazing tour! Magnificent scenery, spectacular underwater spots and millions of stars accompanied us at night. We did the tour with Louis, an english speaking guide from Labuan Bajo. Louis himself grew up in a deserted village of Flores and he is familiar with all questions regarding living conditions of the people and nature in this region. For some time he had worked as a ranger on komodo island. Because of this he is also an expert on Komodo Dragons.

He supplied us with much information and we learned a lot about living in this region of the world. We had really good discussions and much fun. If somebody had a problem, Louis found a solution. In each situation he guided us with good mind and humor. Thank you Louis for the good time we all had!”

View our gallery and Testimonials